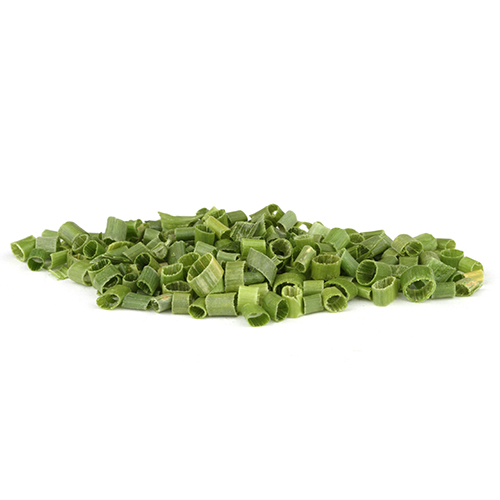 Chives are native to Asia, Europe and North America. Chives were not actively cultivated as food until the Middle Ages. Green stalks with a purple flower on top, this herb only became popular in the 19th century after growing wild all over Europe and North America. Chives are related to the lily family as well as onions, garlic and leeks. Chives are the meekest of the all the onions and has a slightly garlicky and onion-like aroma. Chives have a delicate onion flavor and are a great substitute for onions if you prefer a milder flavor or are cooking for finicky eaters.

Chives are an attractive garnish for green salad and soups, as well as dips, soft cheeses and herbal butters. Considered one of the “fines herbes” in French cuisine, chives pair well with all types of seafood and often come as a garnish on cream soups. The herb pairs well with fish and potatoes and the flowers are used to garnish soups and salads. It is also included in the classic French “fines herbes” seasoning blend and is an ingredient in tvorog, a type of soft cheese enjoyed in Russia and Poland. The pink flower can be eaten and can be divided into florets and sprinkled across food. The tender, mild leaves are eaten raw or cooked in many dishes. The leaves provide the flavor, and savvy cooks treat them as herbs, adding them at the end of cooking to preserve their character and color.

The seeds are produced in a small, three-valved capsule, maturing in summer. The herb flowers from April to May in the southern parts of its habitat zones and in June in the northern parts. Â Chives like a full sun and rich soil. Gardening enthusiasts appreciate the purple blossoms supported by lofty stems, and the fact that their emergence signals the onset of spring because they are one of the first to break through the ground.